Last week Governor Andrew Cuomo banned fracking in New York, citing public health risks. Fracktivists rejoiced, relieved that their state won’t go the way of neighboring Pennsylvania. Pocked with fracking wells, the mountainous counties of northeast Pennsylvania have suffered from contaminated water supplies, earthquakes, spoiled countryside and thunderous truck traffic. As long as the fracking ban is in place, New Yorkers won’t be threatened by methane emissions and toxic fumes from fracking wells, wastewater pools or the risk of a well blowing up or leaking uncontrollably.

Unfortunately, just because New York banned fracking, and even though more than 150 New York municipalities have banned fracking using local zoning laws, the state won’t escape its effects. In fact, New York is already burdened with the fracking industry’s health and safety problems and threats to the environment because of gas infrastructure. 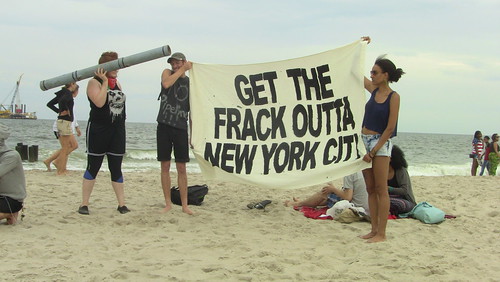 Gas companies are building pipelines to service increasing demand in New York City. In spite of opposition from groups like OccupythePipeline concerned about radon exposure and the risk of explosion, Spectra Energy’s pipeline, which runs under Greenwich Village, went into service in November 2013.

On December 1, gas began to flow through the Northeast Connector Project, which will deliver 647,000 dekatherms daily from York County, PA to 1.8 million natural gas customers in Brooklyn, Queens, Staten Island and Long Island. The new delivery point will shift from Long Island to the Rockaway Peninsula via the Rockaway Lateral Project, a disputed 26-inch diameter pipeline currently being constructed under popular beaches, a golf course, and a federally protected wildlife refuge.

Two years after Superstorm Sandy hit the Rockaways hard, this high-pressure pipeline may pose some super hazards in the event of another big storm. (Sandy is estimated to have caused 1,600 natural gas pipeline leaks overall.) Pipeline company Williams’ record on pipeline incidents and explosions in recent years is troubled, and the company dismissed safety recommendations for Rockaway Lateral from the US Corps of Engineers.

Construction started this fall to convert a liquefied natural gas facility in southern Maryland to enable it to export fracked gas. So far, it’s the only export terminal geographically situated to cash in on all the gas from the Marcellus. But it may have a competitor.

Getting Port Ambrose approved as an import terminal could be a ploy on Liberty’s part. Once it’s built and operational, a proposal to convert it to an export facility could bypass stringent federal review. Liberty could then take advantage of the Rockaway Lateral, supplying fracked gas from the Marcellus. The pieces all fit into place.

Natural gas has to be pressurized to keep it moving through pipelines. Compressor stations are situated about every forty miles along pipelines for that purpose. When a pipeline’s capacity is increased, new stations are built or more powerful compressors are added to existing ones. They emit pollutants like nitrogen oxide, volatile organic compounds, fine particulates, and even radon, since there is radioactive material in the Marcellus Shale. As compressor stations invade more populated areas, their incessant rumble can stress people out.

Opposition to a storage facility for liquid propane gas (LPG) in a salt cavern at one of the Finger Lakes has been fierce. Activists from We Are Seneca Lake, led by biologist and fracktivist Dr. Sandra Steingraber, have lined up to be arrested and re-arrested in civil disobedience actions blocking Crestwood’s expansion.

They fear that a cavern collapse or leak could lead to catastrophe, potentially contaminating the water source for 100,000 people.

Thrilled by Cuomo’s decision to ban fracking, Seneca Lake protestors won’t let up. Over a hundred people have been arrested in the last week alone. So many protestors have opted to go to jail over paying fines that the local judge is now imposing a mandatory $375 fine and refusing jail time.

Fracking fields beyond the Marcellus also impact New York. Oil from the Bakken Shale in North Dakota is transported by rail to the Port of Albany, posing the risk of a spill in the Hudson River.

After the Lac-Mégantic disaster in July 2013, people have been concerned about whether trains carrying the volatile crude oil from the Bakken Shale are traveling through their cities and towns. Environmental groups have asked New York officials to share information on Bakken Shale oil shipments.

In spite of the oil’s volatility due to fracking chemicals, train companies have persisted in using outdated DOT-111 tankers, a practice which Senator Charles Schumer called  “a ticking time bomb.” Recently, a state inspection team found 100 defects on just 95 miles of rail line and 704 tank cars.

The gas industry has been ramping up capacity to get gas out of the Marcellus region. The lack of future gas production in New York may have put a dent in their plans, but they still need to build pipelines and accompanying infrastructure to deliver gas to homes, power plants and, most of all, to new export terminals. With the fracking ban in place, New York’s formidable fracktivists will undoubtedly turn their attention to thwarting gas infrastructure.

Of course, the heart of the problem is the practice of fracking itself. Fracking is devastating people’s lives, health and environment. And the fact is, we all live downstream. If fracking of the Marcellus and Utica Shale formations isn’t reined in, activists and citizens trying to defend their communities against gas infrastructure have to wage a separate battle against every project. The real success of the New York anti-fracking campaign, however, is proof that a sustained and unrelenting grassroots campaign can get results. As more people are emboldened to confront big energy, the tide will turn in other states as well.

3 thoughts on “Even with Ban, New York Can’t Escape Effects of Fracking”